Anyone who’s lived in London for six months or more will tell you that Tube Rage is a real problem that can infiltrate your life, if you let it. It turns would-be sane adult commuters into vicious, defensive teenagers who become tersely territorial over a dust mite-ridden square of carpet pretending to be a seat.

When it comes to Tube seat hierarchy, end-of-aisle seats are prized territory. You get the luxury of a glass pane to rest on, making it that much easier to inch away from your neighbour’s rib-snuggling elbow and vastly spread Evening Standard, draped luxuriously across your lap. But as we all know from the TfL diagram, these seats are reserved for those among us less able to stand: the elderly, the disabled and those with child. Easy enough to identify, right?

Actually, I think there’s a much finer line when it comes to Tube etiquette than the politically correct TfL diagram would have you believe. If giving up your seat really is common courtesy, I’m intrigued as to who really benefits.

A fractured metatarsal once left me saddled in a monster NHS boot. Did anyone offer me the priority seat? Did they heck. I actually had to crudely mime my injury to someone wearing earphones in order for her to get the person in front of her to ask the person sitting down to offer me a seat. Down there in the trenches of the Tube, it’s every invalid for themselves.

Then of course there’s the issue of offering your seat to the third generation, without inadvertently offending them with the implication that they have lost all capacity to stand on their own two legs. Of course, there are those with less tact on public transport, like the bus driver who once told my grandmother: “You don’t have to get out your bus pass; I can see you’re old”. OK, so that’s a little franker than one might expect, but sometimes it’s almost impossible to determine age. Is it based on appearance? Health? Number of grey hairs? We’re all thinking it, but we wouldn’t dare mention it. And the knee-jerk politically correct reaction comes spilling out.

This brings me to the third faction of the general commuting public: pregnant women. It’s much harder to identify a pregnant woman than you think. Of course, there are those who are out and proud, those who are in the later stages of their pregnancy, or those who are simply unafraid to bare their bump and give it periodical loving strokes.

But what about those yet to show? Or worse, non-pregnant women who are a bit bloated, perhaps from eating a particularly large meal or consuming a few too many Merlots (ladies, you know what I’m talking about), or even those who have an unfortunate body shape? Offer your seat to someone who you think is pregnant but who is actually overweight and it’s a whole different hot potato altogether. Even if they have a tummy filled with hot potatoes.

Like any other Londoner, I have plenty of Tube tales under my belt. One in particular sticks in my mind in defence of this article, in defence of Tube Rage, and definitely in defence of pregnant women wearing TfL’s ‘Baby on Board’ badges.

I was standing at Bank station, in my well-rehearsed, carefully positioned spot where I knew the Tube doors would open to transport me up the Northern line. A shortish, aggressive woman came and stood right next to me, to the point where she was invading my personal space (and we’ve already established the value of Underground space). Tube Rage began to swell up through my body, and I prepared myself for the jostle.

Sure enough I got one, with me, the 5’9er, assertively making myself taller and getting through the doors first. Corner seat spied, I plonked myself down, claiming victory. Ah, my pride. The short woman then viciously exerted her own brand of Tube Rage, practically spitting that she was actually pregnant and demanding that I give up my seat. Fuming, I let her sit and then spent the rest of the journey wondering what the world was coming to a pregnant woman was prepared to physically push her way onto a train in order to claim her prized seat.

A few issues here: she wasn’t wearing a badge. She didn’t look pregnant. Would I have been so territorial and defensive if I’d known she was pregnant? Of course not. I began reflecting on my Rage and vowed to myself to mellow my own perceived aggressiveness. On the other hand, why was she pushing so ferociously if she knew that she was higher in the pecking order of TfL’s seating priority? And then the doubts started creeping in. Maybe she wasn’t pregnant. Maybe I should’ve said I was pregnant. And the Rage Monster returned.

There’s not so much of a grey area attached to this issue as a smog-filled Tube tunnel of Rage. ‘Baby on Board’ badges are an indisputably fantastic idea and a breath of fresh air on the Underground. Perhaps one day we’ll live in a world where we can acquire badges that say ‘I have a terrible hangover and would prefer a seat’, or ‘I may look great for my age but my internal problems suggest otherwise’. But I’m not holding my breath.

Let’s make things easier for everyone: if you’re carrying a ‘Baby on Board’, let your fellow commuters know. 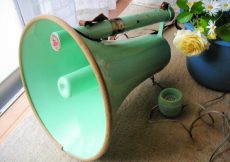