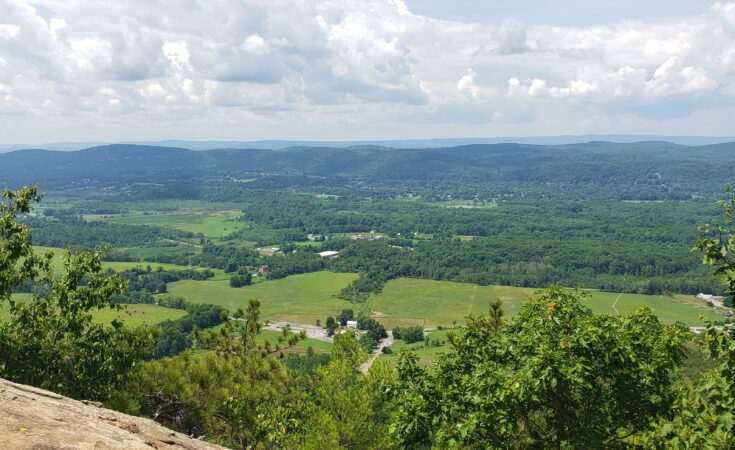 Anyone who knows me knows I’m not a hiker; I’m a city girl. Yes, I love walking, and being in nature (to an extent), but hiking? Hiking is hardcore, and a certain catalyst for my irrational fear of uneven surfaces (walking through mud makes me feel like I’m want to throw up). So when my husband suggested we hike the entire Appalachian Trail in New Jersey – all 72 miles of it – I scoffed. Not that I thought I couldn’t do it physically, but mentally. What kind of surfaces would that involve? Would I be hiking through mud? Bogs? Crossing rivers? Scaling rock faces? Nah, he assured me (lies; I ended up traversing all these terrains and more). Why don’t we try one and see, he said. OK, just one, I said. And so we did just one. And then another. And then another. Little did I know I’d be hiking the Appalachian Trail in New Jersey during a global pandemic, but I’ll come to that later.

The Appalachian Trail, or A.T., spans 2,200 miles from Maine to Georgia, passing through 14 states including New Jersey and New York. Thru-hikers are so named for their attempts to hike the entire trail in one season, often hiking for days and days at a time without stopping (mad). Some people even attempt to extreme run the trail (madder – see Karl Meltzer: Made to be Broken on Netflix). For clarity, this is not your average trail. Trail implies some kind of pleasant, even-surfaced path. The A.T. is classified for its most part as difficult terrain, with the mountains to the north in Maine impassable during the winter. This would not be, as Bill Bryson terms it, a walk in the woods. This would be all my uneven surface demons coming home to roost. 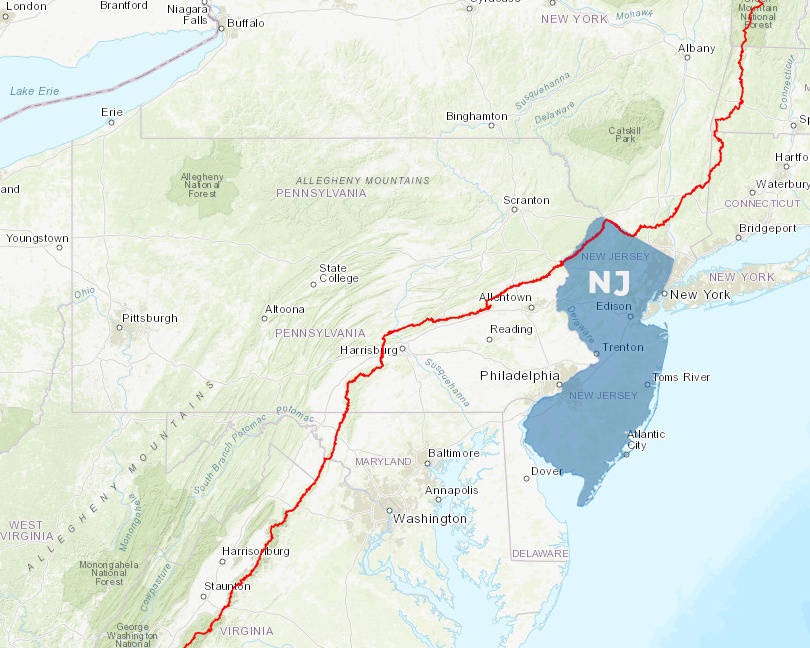 For our first hike, we drove across the New Jersey-Pennsylvania border, parking in PA so we could cross the bridge, ensuring that we didn’t miss a step in New Jersey, that we did this thing properly. We took two cars, parking the first one at the end. The drive – not walk – but drive, took 30 minutes. Let that settle. We’d be WALKING that same distance back to our car. We took a picture at the start and posted to social media, with a “send help if there’s no after picture” message. The first mile or so, crossing tarmac, roads and bridges to the official start of the AT forest trail, was easy as pie. We’d done a mile already! This was going to be a literal walk! And then… national forest. An unforgiving uphill climb. Rocks underfoot. Paths that just stopped and became climbs. Massive boulders. Dense thickets. And this was just the beginning.

After what felt like an eternity, we stopped for lunch at Sunfish Pond, a clear glacial lake at the summit of our climb. There were a handful of other hikers taking their lunch breaks there, but this was hardly picnic-friendly. We clambered for seats on a boulder, legs wobbling, then proceeded to wolf down boiled eggs and beef jerky. I was astonished at how hungry I was for meat in particular, how quickly I was burning calories, and how my body was crying out for this kind of fuel.

We’d been on the trail for five miles or so. Just a casual nine to go. My husband steered me away from the water’s edge; a snake was chilling down there, he told me later. Another phobia of mine. Great. Little did I know that on a later hike I’d have a much closer encounter with a snake. The rest of the afternoon went by in a blur, with many difficult, rocky pathways, culminating in a fire tower climb with outstanding views of the tri-state area (all three states visible at once), and a series of awkwardly angled flat rocks to navigate. By the time we reached the car, it was 6.30pm. We’d started at 10.30am. It’s hard to precisely describe the monotony of a hike like that, the on-and-on-ness of it. My feet were screaming as I took off my trainers that evening: blisters galore. I basically cried into my glass of wine. What a day. Hike one of five: done. 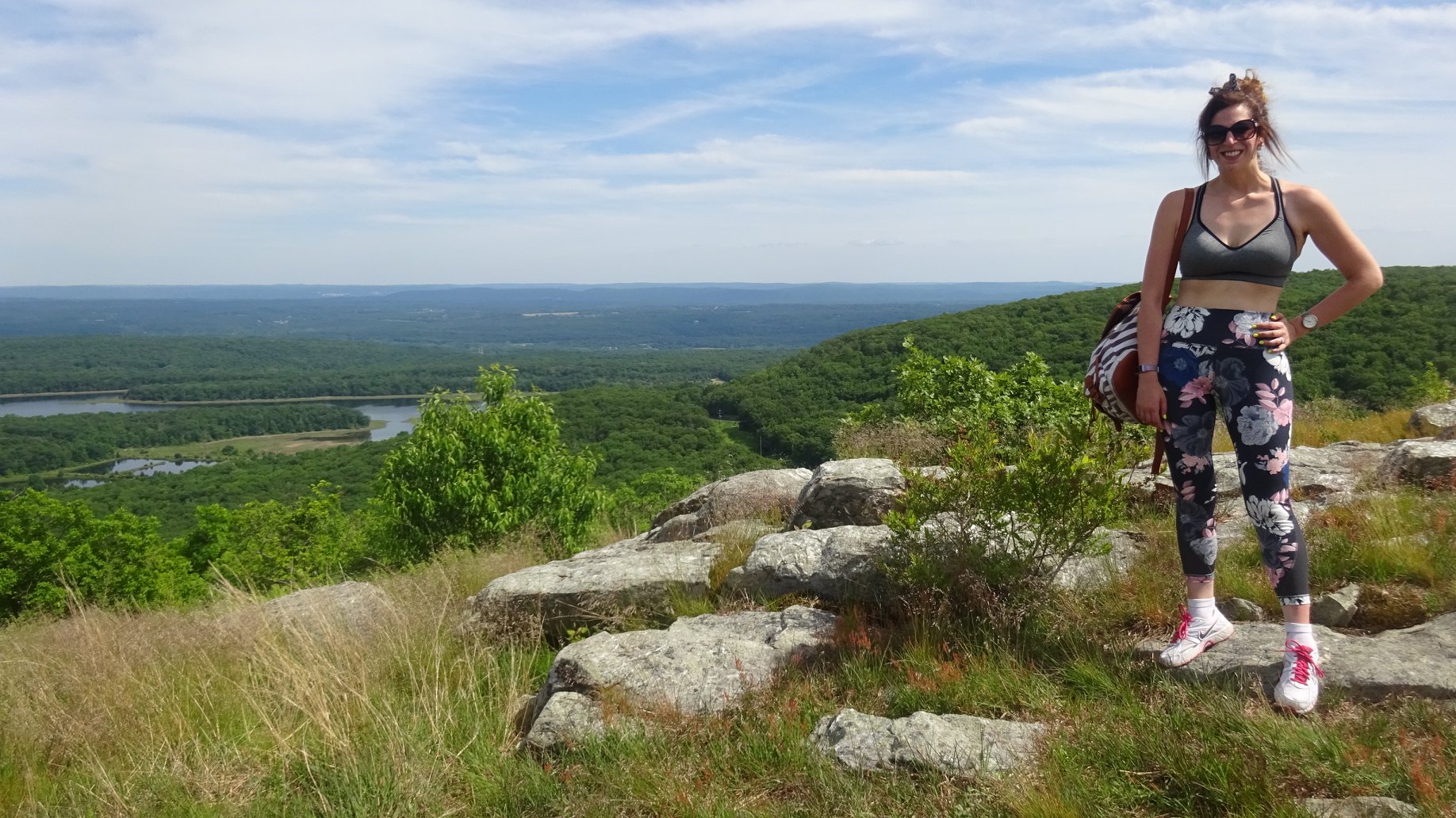 The second hike sort of blurs into the first for me, because this time the psychology was easier: I’d done it once already, so I knew I could do it again. I was becoming more conditioned for it, more used to the monotony of just walking, walking, walking for hours on end and not seeing a single other person, more OK with crouching and peeing into the wilderness. Aside from a worrisome beaver dam crossing right at the start, I think this hike is less memorable because the landscape was more of the same: woods. Ridges. Views across state lines. There’s a curious, specific type of silence that comes with a hike like that. I was beginning to be at one with my surroundings – right until I jumped out of my skin at a nearby stag, imagining it to be a bear. The day was a lot hotter than it had been on the first hike; the air at times was thick and oppressive, and we both were in long trousers since it was the height of tick season. My feet were boiling in my trainers (we desperately needed to buy proper hiking boots), and salt from my sweat severely stung my eyes. Not to sugar-coat it: we stank. Still, we did it. There comes a point, about mid-way through the hike, at which there’s no going back: it’s either hike to the car, or hike to the car. There’s no choice but to carry on, as sweaty and disgusting as we were. 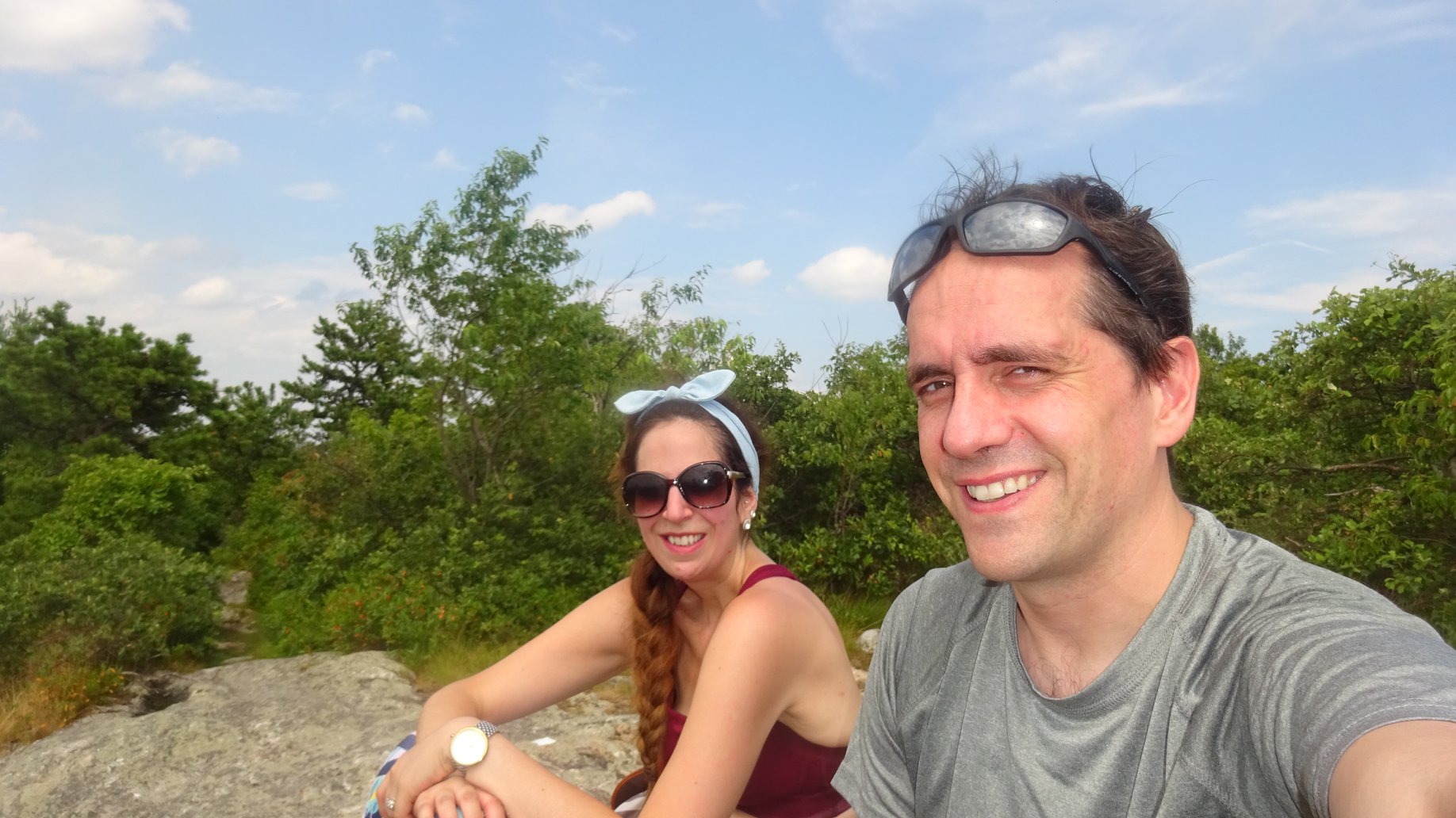 And then… we waited a year. Not because we didn’t want to continue, but because we ran out of suitable hiking weekends in 2019. Little did we know that 2020 was going to be such a bonkers year. Hiking obviously posed more of a risk with coronavirus in the air. How could we hike while wearing masks? Would there be enough room for social distancing on the trail? As it transpired, hiking the Appalachian Trail in New Jersey was actually the perfect social distancing activity. And we had proper hiking boots now: we were getting serious. We hardly saw anyone, just miles and miles of woods, a few shelters, and some epic views.

It was at the top of a ridge overlooking some farmland, daydreaming, listening to the rustle of the wind, where I had a closer experience with wildlife than I would’ve liked: a literal snake in the grass, thick and black and slithering towards me. My brain actually thought SNAKE NOT WIND before I saw the guy. I’ve never seen a snake in the wild, and I’m delighted at how calm I was, at least initially. I believe my exact words (not screams) were: OMIGOD GRAHAM THERE’S A SNAKE GO GO GO. We breezed past it, then I spent the final four miles of our hike jumping out of my skin at chipmunks and twigs, imagining the snake – industrious fellow – to be following us. That last part was not fun.

The saddest thing about hiking during a pandemic is that we couldn’t go for a celebratory meal or glass of wine at the end of the hike, which felt a little anticlimactic. It would be our next hike when we’d need it most.

I shall call our fourth hike our ‘nature’ hike, because this is where we saw every animal (apart from bears): birds of prey, turtles, fish, butterflies, heron, deer, more snakes (I was sort of OK with them at this point). Also, a large part of it was through a flat nature reserve, and while this terrain was allegedly easier, the hike itself was not. We began at High Point, the highest point in New Jersey, where we encountered several masked hikers exploring the monument. Then came more forest, then farmlands, then fields, then lowlands. It was nice to experience this change of scenery. We traversed many puncheons – narrow wooden bridges over bogs – which, while flat, required a lot of concentration. And then: TRAIL MAGIC! Trail magic is a sort of legendary rite of passage experience when it comes to hiking the A.T. It can be an uplifting sight, a serendipitous point in your journey, but is usually the provision of supplies when you need them the most. Some good, kind human had left a cooler with water bottles and snacks by the side of the trail. All our water was warm and our snacks were mushy. I think I might have wept.

For this hike, we were already ambitiously planning a fourteen-miler – our longest yet. But the guide book G had been using was over ten years out of date, meaning that just when we reached what we thought was the final mile – a spectacular view where we could look back across the valley at High Point – the A.T. was unexpectedly re-routed, leading to a three-mile extension. Seventeen miles in total. It’s difficult to describe the exact feeling on completion, other than utterly broken.

The fifth and final hurdle involved a change in scenery again: back from relatively easy flat boardwalks, through farms for four miles, to a hideous climb: the notorious Stairway to Heaven. I had to stop and rest several times during this near-vertical mile ascent, plus there were many more hikers which made social distancing tricky. It was another blisteringly hot day, and I was struggling to breathe. It was then I realized how close I was to having a panic attack. What brought this on? Not sure. But G was amazingly patient, and the reward at the summit was worth it.

Once we’d got past this more touristy part, it was just the two of us again for miles, which seemed like a fitting way to finish. That last mile to the New Jersey-New York state line was total delirium. I think the monotony does something wild to a person. It was entirely anti-climatic – just a white line over a rock – but we’d done it: 72 miles. The kick? To get back to the car was another mile, downhill, which sounds like it should’ve been easily doable, except the downhill was hazardous and we were totally spent. I think at one point I pushed G to keep us moving. Gotta keep moving. Just keep swimming. That mantra got me through on more than one occasion. 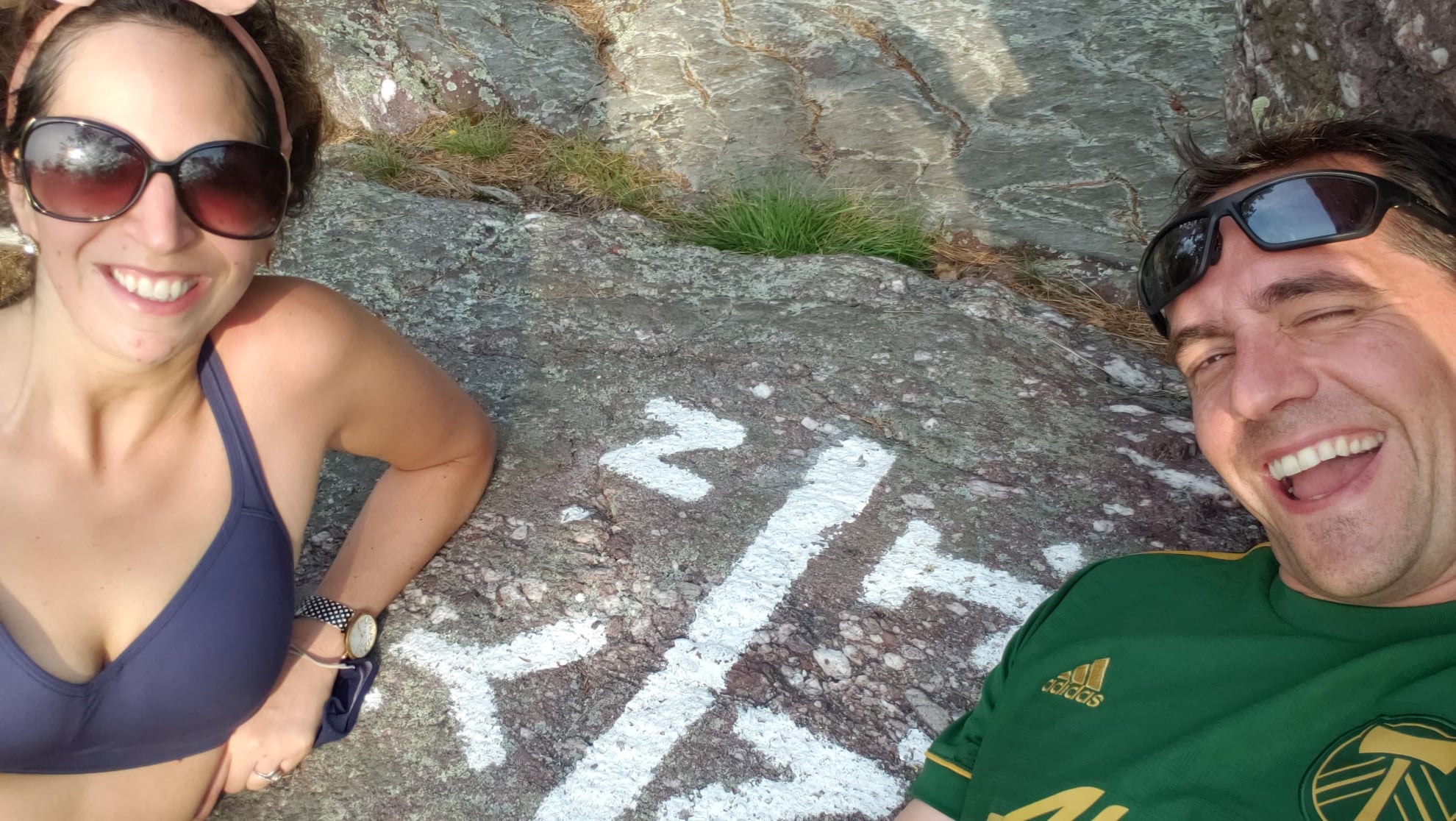 I’m so thrilled I devoted five, non-consecutive days to hiking the Appalachian Trail in New Jersey. I pushed myself mentally more than I thought was possible. I genuinely don’t know how thru-hikers do it, camping and all (one of the best parts is getting to drive home at the end of the day). But I’m undoubtedly fitter, stronger, and more outdoorsy. I’m certainly not the fastest hiker in the world, nor am I the bravest, but I did it, uneven surfaces be damned! Yes, I did it, and it’s done, and nobody can take that away from me. I’m so glad G pushed me to do it, and that we pushed each other, sometimes literally. 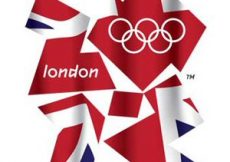 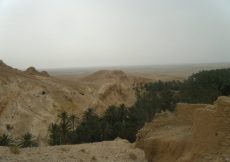